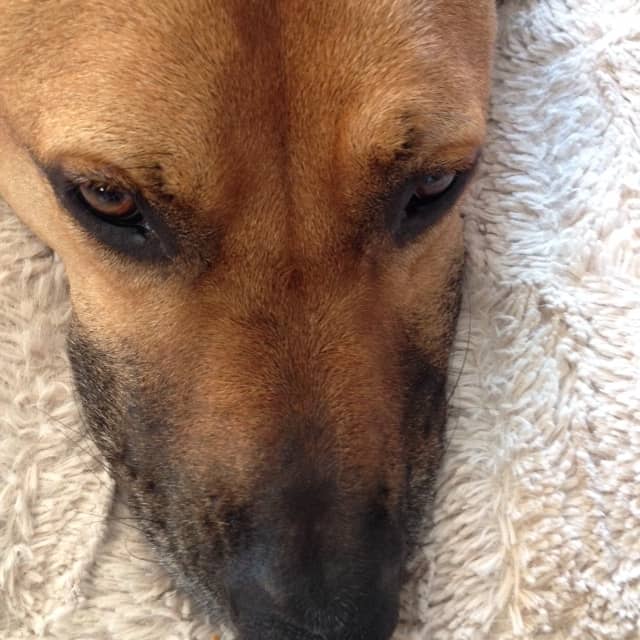 A few days ago, a friend and I met up for a hike.  Just before the trail entrance, we heard a weird noise, like the commotion of a bunch of chickens.  We stopped, tried to locate the sound, couldn’t, and continued on.

The Slobbering Beast was with us, and it’s been a bit since he was on a trail.  He was excited, bounding in giddy circles. He was even more thrilled when two other dogs showed up.  Since I didn’t know them, I put him on leash and called for their owner.   No one appeared.  We waited awhile, the dogs wandered off, and The Beast, my friend, and myself  got back to hiking.  Since we were heading into an area where there’s a lot of wildlife, I kept him on the leash and we jaunted along quite successfully until almost the end.  When the two dogs appeared again.

Still ownerless, but with something white and fluffy between them.

I don’t know if it was the excitement of seeing his potential pals, the smell of blood, the sight of something soft and fluffy, or a combination, but The Beast lost his mind.  He hurtled a small bush and dashed into the undergrowth. He scraped through plants that might have been poison ivy.  He bumped up against several small rocks.

And since I was still holding the leash, so did I.

By this time I was prone, surfing the ground on my shoulder.  My friend was yelling, The Beast was still gallumping happily away toward the dead chicken, the two other dogs were barking a bit, and a single thought went through my mind.  Let go, you fool.  Let go.

It’s hard for me to let go — of work that’s not working, of friends who are no longer friends, of emotions that are not serving my best interests.  So every now and then, the universe likes to remind me in the most physical way possible to move on.  It happened with riding — letting go can sometimes mean the difference between a good, clean fall and a bad fall where you get tangled up with the horse and gear — and now, since I’m not currently riding, the universe has apparently tapped The Slobbering Beast as a stand in.

I can’t control the loose dogs or the dead chickens life may throw at me.  Some days, I can’t even control The Slobbering Beast.  But I can control my response, and hanging on to something that’s not working mostly only hurts me.

Sometimes, as the song that’s playing everywhere these days says, you have to let it go.