Today two things happened: I realized I didn’t have a blog post planned, and my daughter thought the dog looked like he wanted an adventure. I will never say anything about blog posts in the dog’s hearing again, so help me.

My kids go to two different schools now, in two different towns with different schedules, and the Slobbering Beast does not like this. He hates when a kid leaves the house on his/her own, as my daughter does when she is carpooling, and this morning he stuck to her like glue. “I think he wants to go to school with me,” she said, and at her words he went and parked himself at the door. “He looks like he wants an adventure.”

We laughed about it and I moved him out of the way and then she left for school and I went up to have my own adventure waking the boy, but not before letting the Beast out. On days when I don’t drive the carpool, the routine is we wait for the girl to leave, The Beast goes outside for a short run around the house and a cookie from the neighbors, and then he comes in for breakfast.

But this morning, he met his match. I heard a loud noise, like a flame-thrower — Whoosh, thump, whoosh, thump — but when I looked out the boy’s bedroom, didn’t see anything. About five seconds later, the phone rang. It was my neighbor, telling me a hot air balloon had almost landed in our yard. Now, the Slobbering Beast does not fear much, but apparently this thing descending from the sky was the breaking point for him. He galloped out of the yard and headed for the hills.

I am blessed with very good neighbors. While I yelled for the boy to GET UP! GET UP NOW! and grabbed my car keys, they were already in action. One stayed at home to relay messages and three headed out to search. The boy and I looked too, with no success, until it was time for school. I was just heading back and turning onto the road where we hike when I got a phone call saying he’d been spotted on the trails. I looked ahead of me and there was another neighbor, waving me down.  I pulled in and started calling, and within five minutes the Slobbering Beast came crashing through the undergrowth, looking a bit wild-eyed. He’d taken the cookies the neighbors had bribed him with but wouldn’t let them grab him. I’m not sure if he was spooked or just enjoying his time off, but he’s back, looking quite content.

Next time in the morning I will say something more useful, like “I wish the Slobbering Beast would bring home a million dollars,” and see what happens. Although perhaps he already did — my neighbors are worth at least that. (Thanks, guys.) 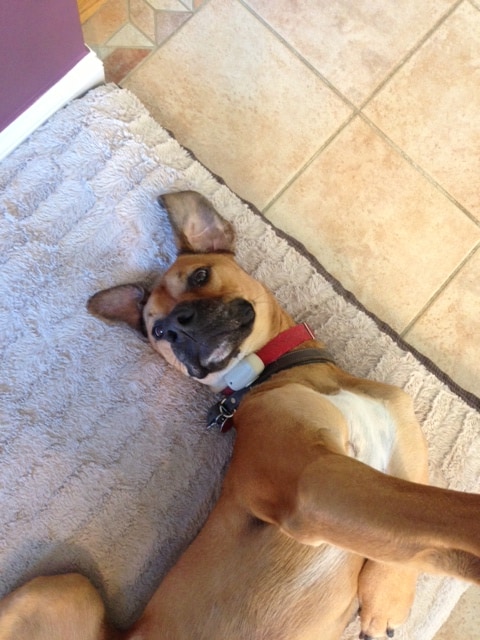