For me, one of the most interesting and challenging parts of writing character-driven books is making sure my protagonists stretch and change in a believable way.  Frodo from The Lord of the Rings series is my shining example of this:  He starts off the series as a happy-go-lucky little hobbit with good intentions, and ends it fundamentally changed in spirit and in body.  (I’ve always wondered if he would make the same choices if he could go back to that famous birthday party in the Shire.)

To evoke this kind of change in a novel is one thing.  To sustain it in a believable way across multiple books is another.  That’s why I’m thrilled to have K.A. Stewart here to talk about how she does it.  Stewart is the creator of Jesse James Dawson, a slender, ponytail-wearing demon slayer who wields a samurai sword by day, but moonlights in a funky retail store to pay the bills.  (Apparently demon killing doesn’t come with great dental coverage.) A dad and husband, Jesse consistently faces tough choices that tug him in directions he might not always want to go. How he reacts and changes is what keeps me reading.

Jesse is a wise-cracking slayer worthy of Buffy herself, and I was delighted to discover him in A Devil in the Details.  I’m looking forward to seeing where the next book, A Shot in the Dark, takes him. Please welcome Stewart as she shares her secrets for character development in the first-ever Secrets and Obsessions guest post! 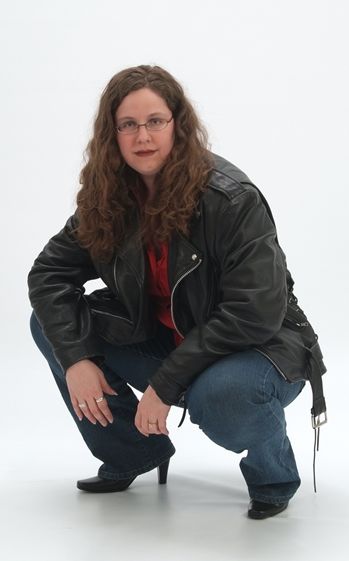 Ergo, change = good, yes?  Well, hold your horses.  While an unchanging character can lose reader interest, a character that changes too drastically, or without logical cause, can make a reader run screaming in the opposite direction. After all, the reason that people stick with the same series for multiple books is because they’ve found something in one of the characters that they identify with, and they’ve come to care about them.  If their favorite is suddenly not the same person at all, it’s hard to still care.  It’s like learning to love a total stranger all over again.

So how do you find this happy medium, the narrow trail between stagnation and making your character unrecognizable?

First off, let’s think about our favorite character.  Mine is (and I know yours is too) Jorge, the psychotic zombie marmoset.  (Just play along, ‘kay? I swear this will all make sense.)

We love Jorge.  He has a dark past, but strives to do good.  He has friends around him who remind him all the time why he wants to help others and leave his wicked ways behind.  He might, just might, even be falling in love again, even though that witch Denise broke his heart years ago.  We like his new girl, Penelope.  She’s good for him.

Now, if Jorge hovered at this point forever, eventually we’d get bored.  We’d know that in every book, he’ll have a deep meaningful conversation with his mentor, Harvey the June bug.  He’ll have a charmingly awkward exchange with Penelope, without ever asking her out, and he’ll defeat the bad guy of the week by using some bit of dark knowledge from his past that he’s now put toward the forces of good.  Sure, it’s fun for now, but by book five, you’re thinking, dear gods man!  DO something!

Conversely, let’s say that in book three, Jorge suddenly wakes up and instead of inhaling his first cigarette and black coffee like always, he suddenly opts to have orange juice and start jogging. Wait, what? Healthy foods are anathema to the Jorge we know and love.  Next, he rescues a kitten from a tree and pats the impish-but-mischievous neighbor boy on top of his curly little head with a smile.  Why? Jorge barely tolerates that kid!  Dear lord, the entire world has gone insane!  Now, if this were to lead into a storyline where Jorge had been taken over by the Pod People from Alpha-Gamma 12, that could be cool.  But if he’s just suddenly different, with no explanation… Well… That’s just not Jorge.  It’s some other character, with Jorge’s name slapped on him, and that’s not what we want to read!

BUT, I’m willing to bet every one of you would like to find out what would happen if Jorge asked Penelope out, only to have her kidnapped by his arch nemesis (long thought dead, of course).  What lengths might Jorge go to, to get her back?  Not just because she might be the new love of his life, but because she is the one truly good thing that keeps him walking the straight and narrow.  How far into his dark side is he willing to go, to preserve that light?  And let’s say he has to kill a few innocent bystanders to get there…  That kind of thing leaves a mark, mentally, emotionally…grammatically…  Let’s say he saves the girl, defeats the bad guy, but he’s also learned just how bad a guy he is himself.  We the reader are intrigued!  Will Jorge truly slip back to the dark side?  Will Penelope leave him if she finds out?  And OMG, he picked up the Cursed Sword of Nathmazaaaaaaar!  We ALL know what THAT does!

Now, what if in the next book, Harvey was also killed, and Jorge had no one left to be his conscience?  Left to his own devices, can Jorge still cling to the path he’s chosen?  And in the book after that, Jorge is betrayed by the one guy he thought he could trust.  His faith in the goodness of humanity is forever shattered.  In the face of that, will Jorge continue to fight his own demons, or will he slip back down into the shadows where he came from?

These are the questions that keep us coming back to series.  We love these characters, yes, but we also want to see what happens when they are stretched to their mental and emotional limits.  And in the end, though the road may be long and twisty and dark and possibly paved with the skulls of a thousand sacrificed pygmy shrews, we are satisfied to see that Jorge fights through and comes out the other end, perhaps scarred and battered, but whole.  We get to see that Penelope loves him just for what he is, dark corners and all.  And we get to finally see him kiss her, so that’s just a bonus.

For this, we would tune in again.  Put a character through their own personal hell, and the reader will certainly come back to see just who walks out on the other side.  Because deep down, we can’t say that we would have done differently in his place.  We lived through it with him, walked that road, fought that fight at his side.  It gives us that connection to him, that desire to see if he (and therefore we) could conquer such adversity.

Character development is one of those things that must be handled carefully, yes, but it is also something that can develop quite naturally, organically even.   It’s all about how your character reacts to situations, both good and bad.  Your character should never live in a vacuum.  There is STUFF around them, and that stuff shapes who they were, who they are, and who they could become. If you just let it.

Want more?  Learn more about Stewart, Jesse, and the books  at Stewart’s blog, On Literary Intent.