A Forest in the Trees (For Norman)

Before we moved to the suburbs, we lived on a run down horse farm in a town with a population of maybe 3,000 people.  I do not joke when I tell you that the cows often outnumbered the human residents.  My husband probably deserves sainthood for staying there with me for that long, but I loved it.  Everywhere you looked, there were trees. You could stand on the back deck and look out and literally not see another house anywhere.

When we moved to our current residence, there was a stand of scrub oaks in the front of the yard.  My husband suggested we take them down — they’re not particularly attractive and they shed leaves in fall like crazy — but I was adamant that they stay.  If you look carefully — if you squint and blur your vision a tiny bit — those trees block out the neighborhood from the front of the house.  When we first moved here, I did that quite often. Later, when I’d adjusted to being back in civilization, I’d put a baby monitor, sealed in a plastic bag, under those trees, and fill the feeders that hung in front of them.  My children would come down for breakfast, sleepy-eyed, and listen to the chatter of the birds, the fat flickers and the cheerful chickadees, as they ate their oatmeal.  If I couldn’t give them a forest in their backyard, I could at least let them hear what one sounded like. 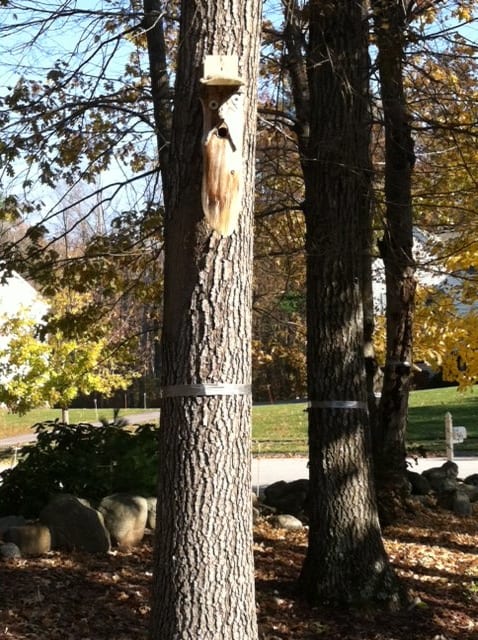 Later still, I found out that the land on which my neighborhood is built used to be a sawmill.  The man who sited our house grew up riding his bike here through the trees.  His grandfather owned the land, and every now and then, he’d talk about how it used to be, and he’d sound just a tiny bit wistful.  He’d used the last boards harvested here for beams in his barn, which is where I kept my horse when we moved.  I liked the idea that although Centurio was no longer in my back yard, a part of my yard was in his stable.

During last week’s storm, we lost big branches from our scrub oaks.  A few more dangle precariously from their tops.  The oaks are no longer just unattractive nuisances — they’re dangerous, and they must come down.  We went out this weekend and marked the ones slated for execution with duct tape, which turned out to be almost all of them.  My husband, good sport that he is, promised me we’d replace them with  dogwoods, with japanese maples and weeping cherries and white spruce, all the trees that I love.  It will be much prettier, and I find I’m okay with it.  But a tiny part of me will miss those scrub oaks, and the forest they contained.