So, we’ve been snowbound for two days.  It’s been fairly productive.  Today we made bread, I finished the disaster of a scarf I’ve been trying to knit, and I managed to clear the driveway with the snow blower without losing a limb.  (If you’re reading this, Dad, all safety procedures were followed.  Mostly.  There’s supposed to be a spark when you turn the ignition key, right?)  I’d show you a picture of all of the above, but I’m too exhausted.

Which is by way of explaining why I’m a little behind on this posting this.  (Remember?  I said I had a book giveaway today?)

I have been very lucky as a writer.  I’ve met incredibly generous people, people who freely gave of their time to make me a better writer.  Ellen Meister is at the top of that list.  About 10 years ago, I joined a writing forum where you could post your stories and have them critiqued.  I was fortunate enough to have one of my stories catch Ellen’s eye, and she gave me fabulous feedback on it.  She also took the time to electronically introduce me around the forum to other established literary writers, such as Mary Akers and Katrina Denza, who all treated me like a kid sister, letting me pal around and learn from them.  It’s an experience for which I’m very grateful. 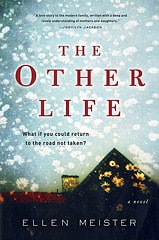 It’s amazing to me, but Ellen and I are going to be sharing shelf space this year. In the time I’ve known Ellen, she’s published two books, both of which have been smart and funny.  (She’s an overachiever like that.) But it’s her third book — The Other Life — that I think is going to catapult her into becoming a household name.  It’s about a woman, Quinn, who gets some devastating news about the baby she’s carrying.  But unlike most people, Quinn has a choice – she can escape to a parallel life, one that’s glamorous and exciting, in which there’s no hint of any problems and in which her beloved mother is still alive.  The catch?  If she chooses that world, she must say goodbye to her husband and young son — forever.

I was lucky enough to get my hands on an advanced copy of this book a few months ago.  But I think it is so well written that I want to share it, so I’ve ordered an extra copy.  To win it, leave a comment before Tuesday, and I’ll randomly choose a winner.  (Bonus points if your comment involves another life that includes chocolate, red wine, and cute British movie stars.)