Last week I was sitting on Rory, listening to my instructor correct some point or other in my riding, and another person in the class commented on what a lovely head set Rory had as he stood there.  His head and spine were perfectly rounded, he was mouthing the bit, and he looked like a real dressage horse, instead of a get up and go hunter. (Like this, if you are looking for a visual.)

“I know,” I said. “I can get him to relax into it when we’re stopped, but not when we’re trotting.”

You know how the second the words come out of your mouth, you regret them? I should know better to ever, EVER  tell a riding instructor I can’t do something, because they will take it personally. They will devote the rest of their lives to making sure that I can. Or at least the rest of the lesson. And this instructor is no different.

“Of course you can,” she said immediately. And I silently cursed the person who had commented as I dutifully went off at the trot to get Rory on the bit.

But here’s the thing. People call riding a conversation, and it really is. No matter how big and powerful you are, no matter how harsh your aids, you cannot make a horse do something he doesn’t want to do.  You may prevail for a while, you may get your way that day, or the next, maybe even the third, but at some point in time there is going to come a reckoning, and it is not going to be an attractive one.

Instead it’s like getting a three-year-old to eat their peas.  You ask nicely.  You mix them with a bit of honey, maybe, and you’re not surprised when they come back at you.  You give it some room and you ask again. You mix them with carrots, you use them frozen to soothe sore gums, and eventually, if you’re persistent and you really, really want it, you have a three-year-old who will eat peas.

Let us say that Rory does not like peas in any way, shape, or form.  We’d had this conversation on our own, with me kind of suggesting, in a timid way, that he might want to try them, and him spitting them back out at me hard.  No peas for him, I’d decided.

Because the other part of the conversation of riding is that once you ask a horse for something, you have to follow through. You have to mean it, to really commit, because if you don’t, then the horse has just learned that he doesn’t have to respect you.  That you aren’t serious about this, and he can ignore whatever other suggestions you might have, which can get dicey when you’re outside and you ask him to pay attention to you, not to whatever is blowing in the breeze, or when you ask him to go over a jump.

But here was my instructor, telling me to give Rory some peas, telling me I was capable of doing this, that I NEEDED to do this. So I swallowed hard, and started the conversation.

It went about like you’d expect.  Rory huffed and puffed and behaved a little bit like a punk, tossing his head hard at me and stomping sideways. It wasn’t a full-scale temper tantrum, just a little bitty one, the equivalent of a toddler dumping his dish on the floor. No real malice, just curiosity about what would happen. Nothing personal.

“You can do this,” my instructor said. “And if it helps, I’ve never known him to buck.”  It didn’t help one bit, since I have a mortal fear of bucking based on past painful experience, and whenever anyone says that it’s the equivalent of saying the Titanic had plenty of life boats.

But I stayed with it, despite the huffing and puffing. I breathed and unfroze myself from the self-protective frame I’d immediately folded into.  I kept asking, nicely, and eventually Rory got tired of putting on a show. He recognized that I meant it, and he dropped his head, rounded his frame, and looked a little bit like a dressage rock star.

After, my instructor took me aside and reminded me that I had the skill to do this.  I had the talent, even if I hadn’t used it in a decade. That I should be able to get on a horse even after 10 years and politely and firmly explain what we were going to do, and then do it. That it’s not just skill, but self-confidence too.

Publishing is a very similar conversation.  You can’t make an agent take you, you can’t make a publishing house buy your book. You can’t make readers fall in love with your story.  But you can be prepared. You can be as skilled as you possibly can be before you start that conversation. You can commit all the way to making it happen, to getting better and better, to not taking the rejection personally, but to getting back to a place of strength for the next time you ask. And the time after that. And every single time going forward. Until at last, you get that yes. 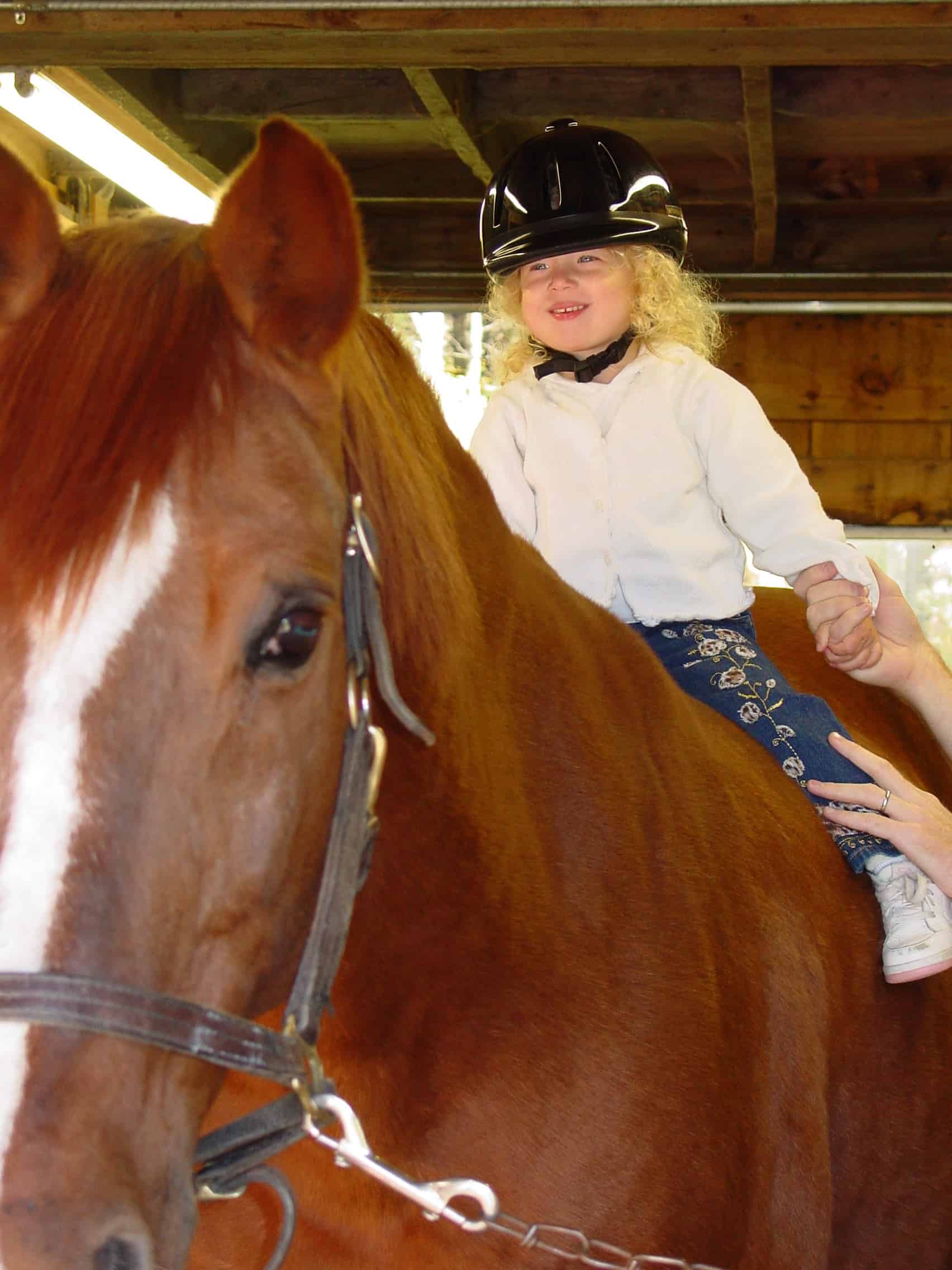 My little girl on my big sweet non-punk horse.