When my daughter was born, I promised myself that I’d stand firm against the sea of plastic I saw other kids playing in.  I wanted only handmade, beautiful toys for her, in the Waldorf tradition, made by elves who only ate organic food, drank milk from virgin yaks,  and shunned sugar.   We even went to a Waldorf play group for two years, until I had my second child and the 45 minute drive became too crazy.

And then, somewhere along the way, I found myself drowning in the same sea of plastic and more.  There’s an air hockey table in the basement, along with a full-sized basketball arcade game, from the same godparents who are just dying to buy a pony.  There’s a scooter that was supposed to be an outdoor toy, but that my kids prefer to use for runs to the bathroom or to the kitchen.  There are enough stuffed animals to set up a toy store. And while I stood firm against Bratz dolls and violent action figures, I did get sucked into American Girl Dolls and Thomas the Train. (Curse you, Mattel!)

But despite the concessions, I have managed to keep one small Waldorf-esque tradition — the nature table.  Each season, we deck it with natural (or natural looking, since I’m a sellout these days) materials that represent what is happening outside.  I’ve done it in different places in the house, but it seems to work best on our dining room table.  It’s such a part of our lives that I don’t even notice it most of the time.

The other day we had a loud, rowdy play date that seemed to involve almost all of the toys in the house.  (And to complete my fall from grace, lots of processed sugar, too.) And then I was passing by the dining room and I heard one of the visitors say “You know what I like most about your house? It always has something from nature in it.”

Even when you think they’re not paying attention, apparently they are. 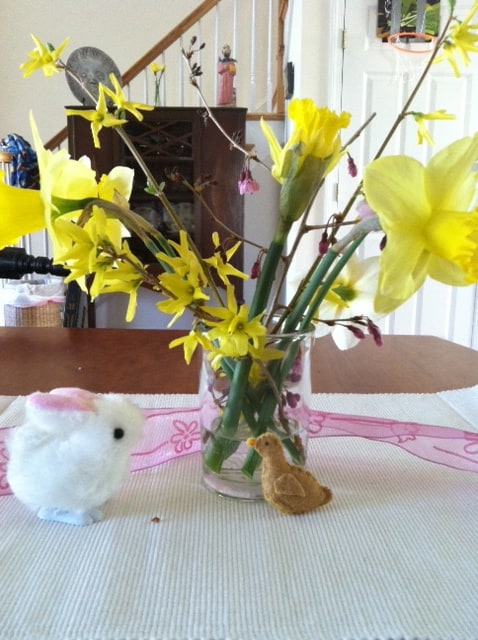 At least one of these things is from nature, right?