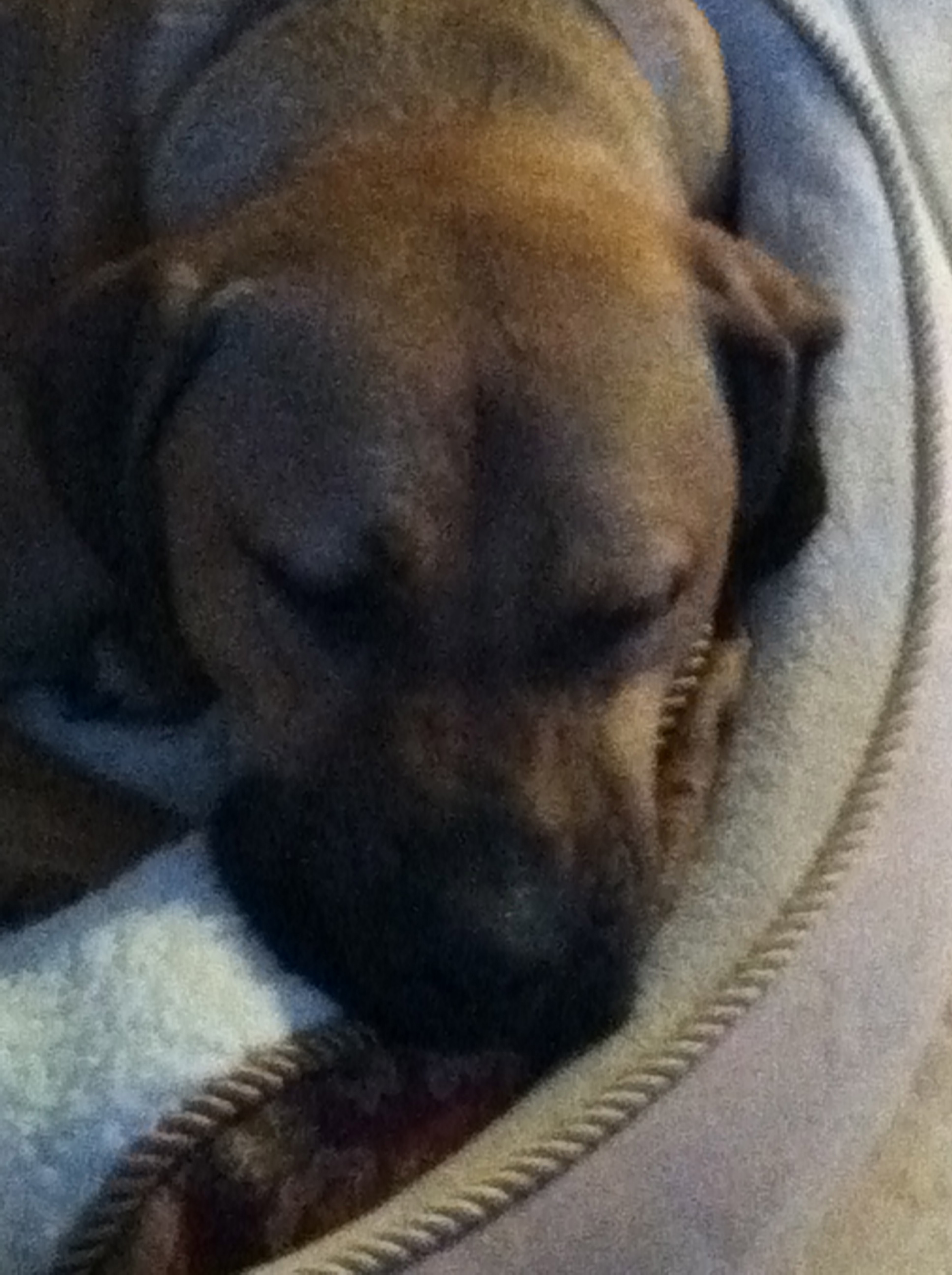 Harley came to us when he was an adorable puppy and looked like this. 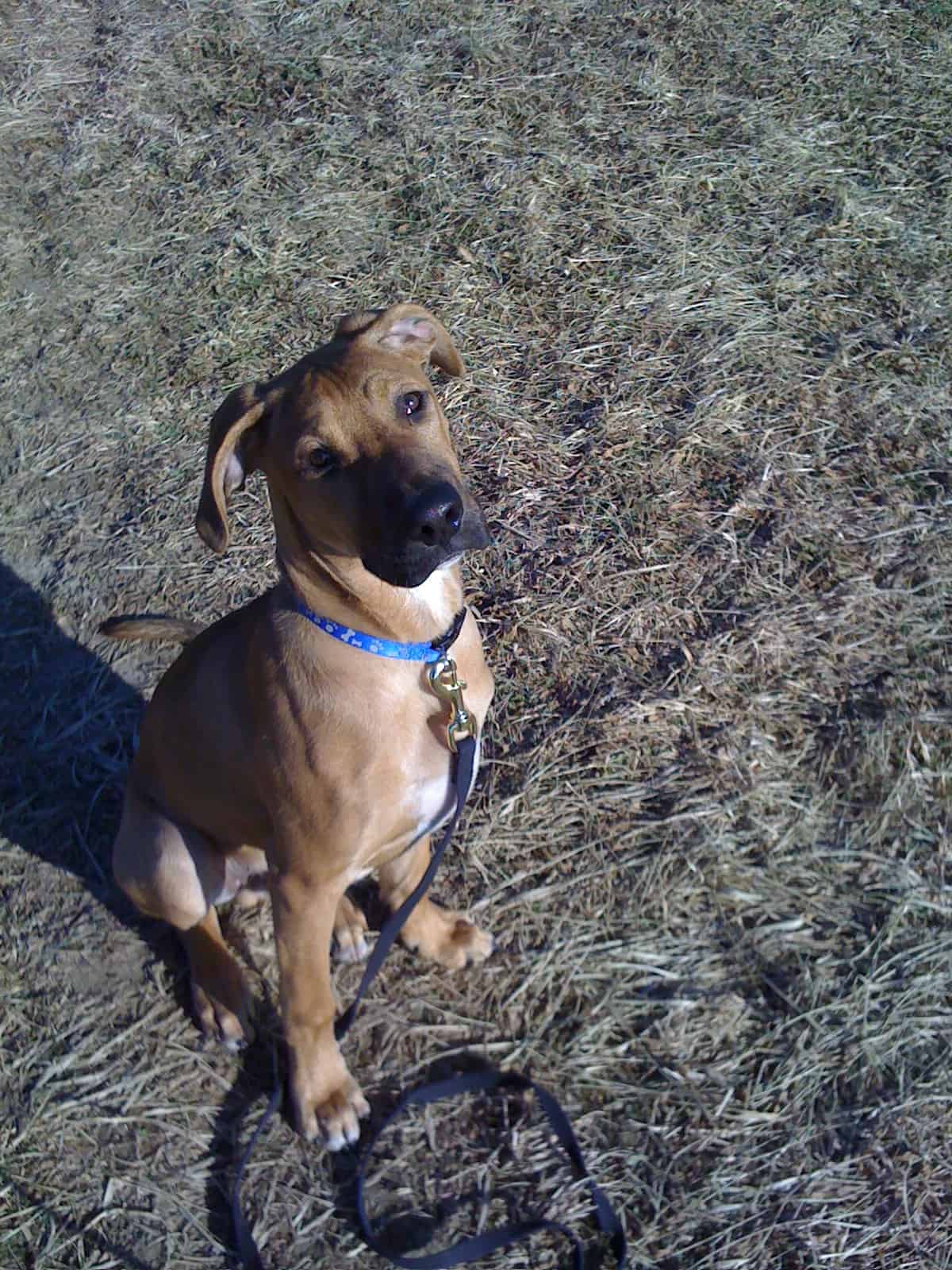 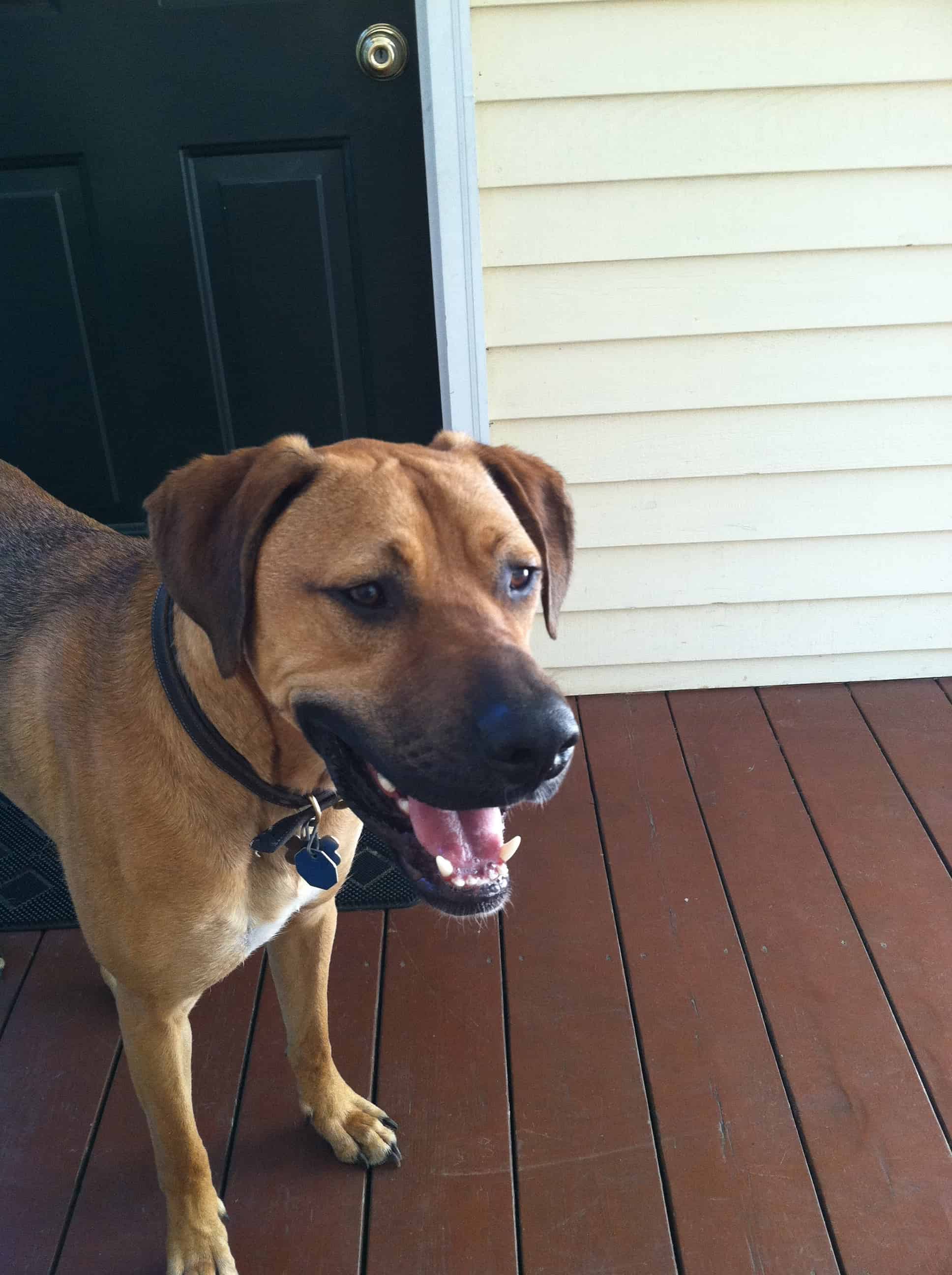 Harley has many positive attributes.  He is firm in his belief that the only good squirrel is a dead squirrel.  He thinks teenagers should have 9 p.m. curfews, and if their parents insist on letting them out after that, he insists that they stay on the opposite side of the road from our house.  If they forget, he reminds them.  Loudly.

His best trait, however, is the fact that he loves kids.  Mostly mine, but if they aren’t available, he’s fine with whoever happens to leave theirs laying around.  He is never happier than when there’s a pack of children over and he’s in the middle, tongue out, running hard alongside them in a game of tag or ball.  The kids use him to find each other during hide and seek, and as a shield during water pistol wars.

He’s very agile and has managed to avoid more than one collision that made me cover my eyes by leaping to the side (and sometimes over) a small child who has forgotten the rule about not running around corners of the house.  I cringe, expecting to hear the ‘thunk’ of eighty pounds of muscle hitting forty pounds of boy flesh and instead I see Harley, valiantly twisting his body into an unnatural pose in mid-air. 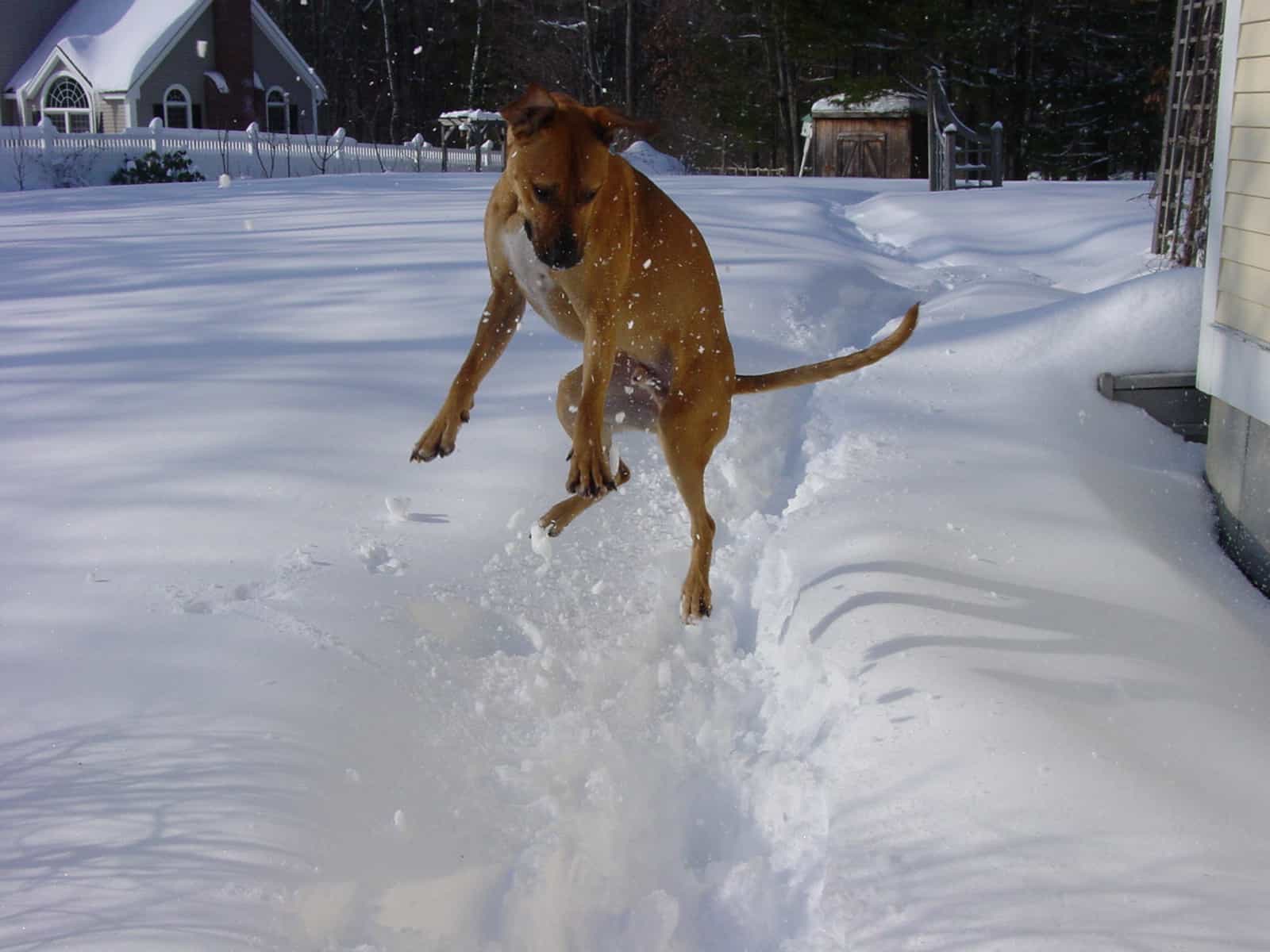 I am a very protective dog owner, and still somehow Harley has been stepped on, ridden, painted with marker, dressed up and sat upon.  So long as he can be involved, he’s okay with it. 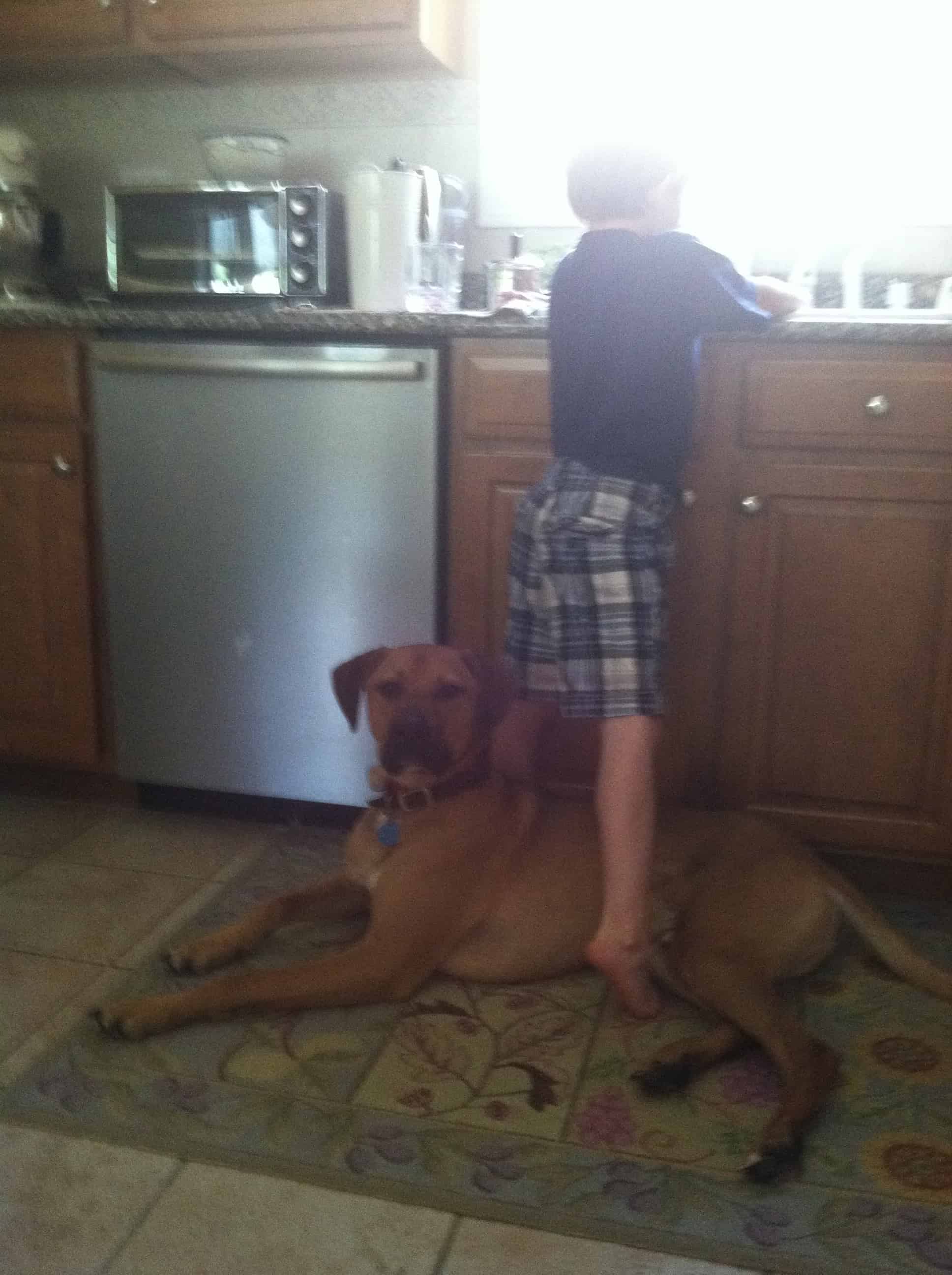 Harley’s main, overriding flaw, and one that he has had since we adopted him, is that he lacks … intestinal fortitude, shall we say.  Our previous dogs had cast iron stomachs, ate everything from horse poop to dead rodents and barely belched.  Harley’s stomach formerly belonged to a little old Victorian lady who only used it for weak tea and cucumber sandwiches on white bread.  She still got the vapors.

Every few months something inside him just … lets go.  To avoid offending delicate reader sensibilities, I’ll just say that Harley turns into the Blast-Ended Skrewt from Harry Potter.   It is not pleasant.  We’ve had him tested for parasites multiple times, changed foods, kept him under hawk-eye supervision to make sure he’s not eating contraband … nothing seems to help.

Our latest efforts involve putting him on a grain-free diet.  It’s too soon to tell if it will work, but I can say that a bag of this food — which has salmon and sweet potatoes and probably a maitre d’ in there somewhere– costs the equivalent of a nice … a very very nice … bottle of bubbly.  Not that I’m resentful, or anything.

However, I’ve decided that the Slobbering Beast needs to start earning his keep, not just eating it.  I thought about his many talents, and while I could rent him out for squirrel patrol (Hi Dad!) or possibly babysitting jobs (he’s very good at wearing small boys out) I was looking for something a little more … glamorous.  Something that befits a dog of his dignity, so to speak.

Then I read that the fabulous and kind-hearted Joshilyn Jackson was running a contest to promote the paperback release of her novel Backseat Saints.  I am a die-hard Joshilyn Jackson fan, and I loved that book.  It has a very nice dog in it, too,  one that is not a Blast-Ended Skrewt.  Harley and that dog could be friends, maybe, if Harley were fictional and smelled better.

So, I decided to try renting Harley out, like billboard space.  I’m doing a test case with Backseat Saints and  Jackson’s not-yet-released next book, A Grown-Up Kind of Pretty.  On our daily three-mile jog we must pass at least … I dunno, fifty houses? Maybe more.  Plus cars and whatnot.  And that’s just here.  Sometimes we humiliate  the poor dog by taking him for walks in other places, too. 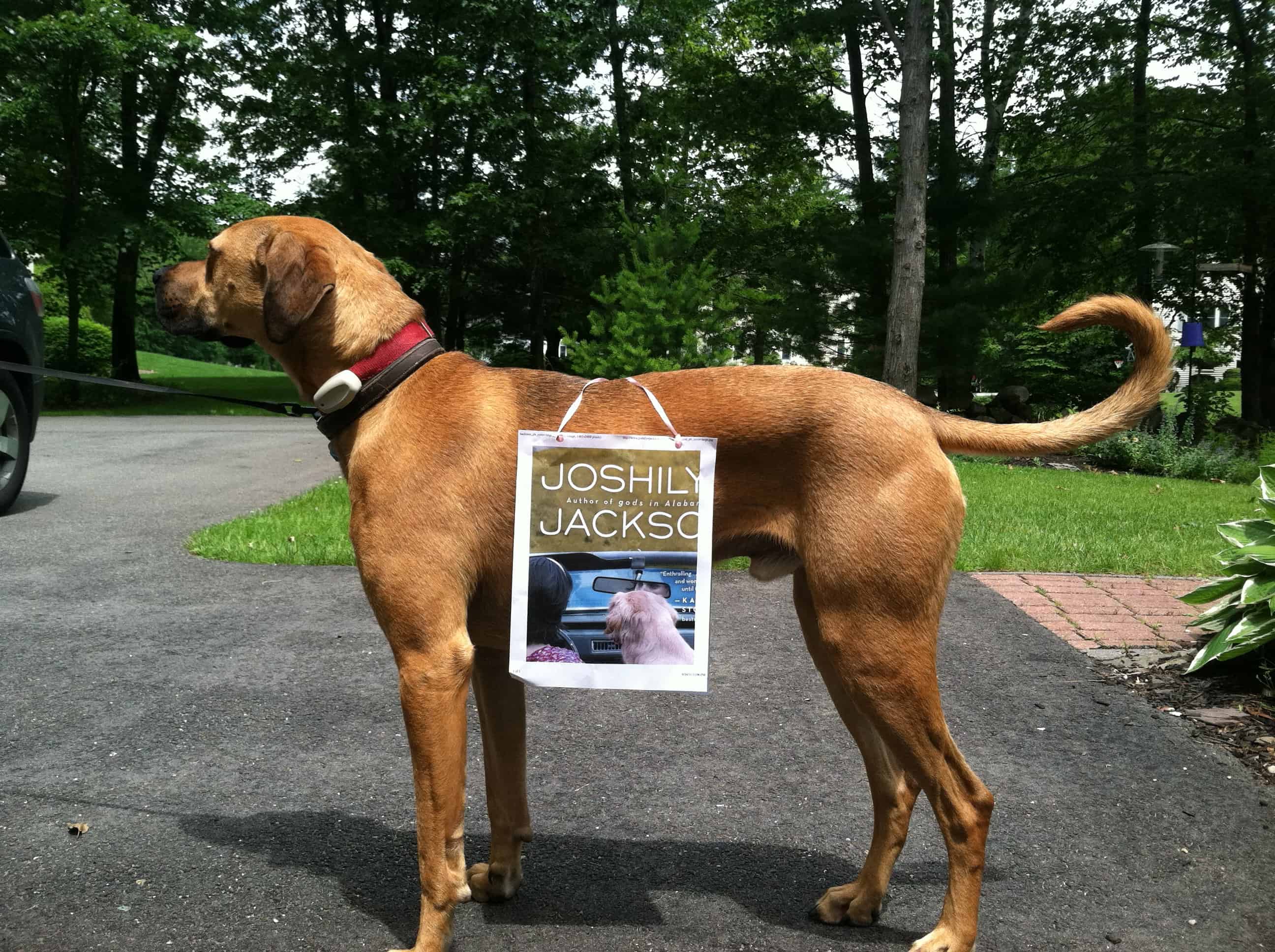 Oh humiliation, thy name is dog. 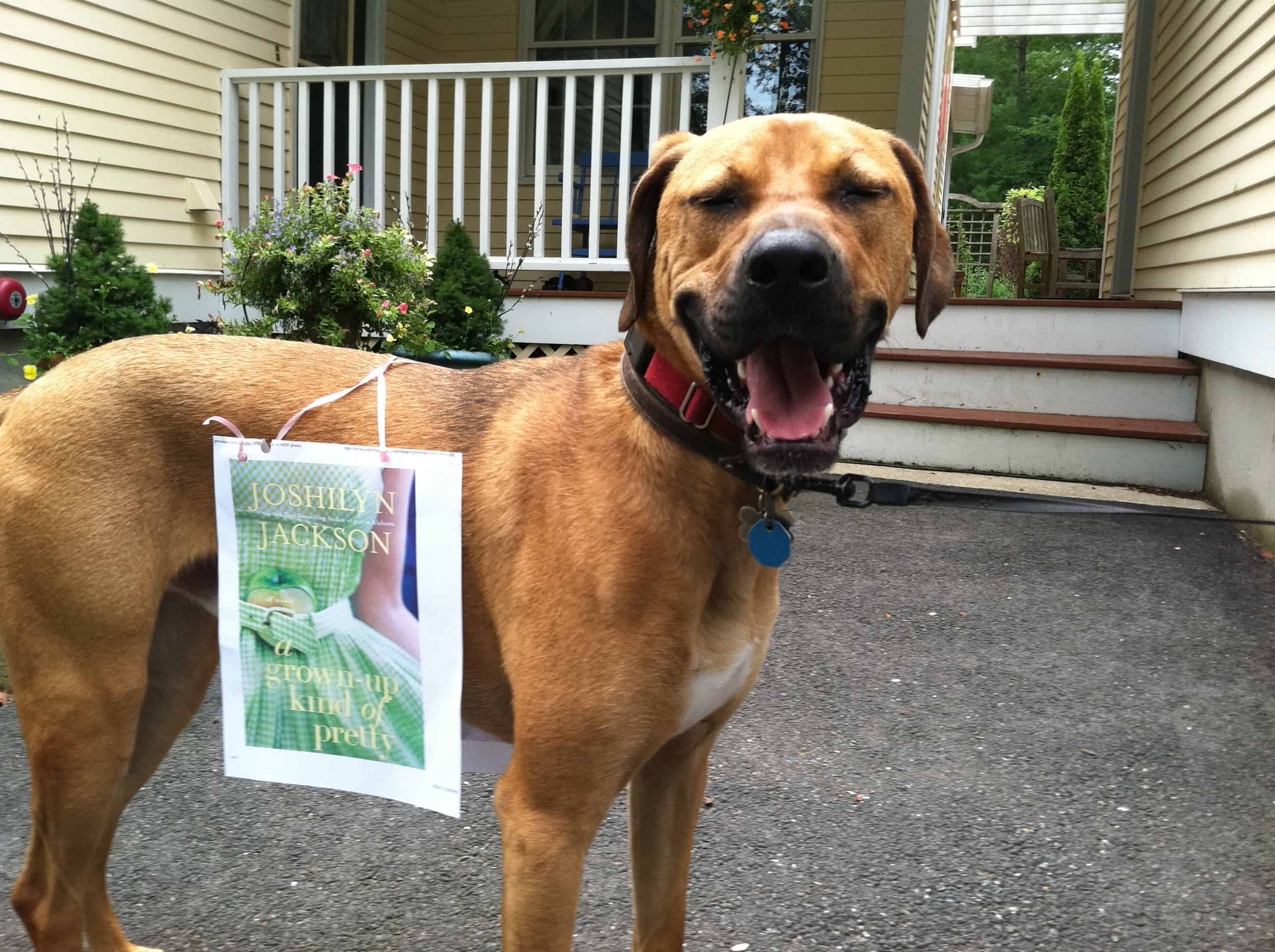 I think I have single-handedly solved the publishing world’s dilemma of how to reach readers, don’t you? J.K. Rowling, feel free to call me anytime. Me and the Skrewt are waiting.