Coffee and an Ex-Nun

So!  Exciting news!  The lovely and charming Coffee and a Book Chick has an interview up over on her website with me.  Hasten there and you could win a copy of Evenfall! (She also has an awesome pup named Roma who could be twin to the slobbering beast …you can search her blog for pictures.) A big thank you to Coffee and a Book Chick for hosting me!

Today’s the day for a giveaway here, too.  I’ve been talking about the different writing communities I’ve joined over the year.  Absolute Write is the most recent.  It can be a little feisty — I lurked there for a whole year before I posted one comment — but I’ve been lucky enough to find a bunch of big-hearted, funny and fast-typing writerly types.

Alice Loweecey is one of those people — and even better, she’s my ‘debut sister’ meaning her first novel is on the shelves right next to mine.  I thought it would be fun to ask her a few questions about her book Force of Habit, which features a nun turned P.I..  Alice, you see, is an ex-nun.

I attended catholic school with actual nuns for eight years. They were fabulous. Were you really a nun, or is this just a publicity stunt?

There must be a written rule somewhere in Heaven that if you lie about being a nun the ground opens up and the Devil drags you straight down to Hell. Yes, indeed, I was a nun for four years and have the pictures to prove it. There are four still in existence, one for each year, because I hand-shredded the rest. It was quite cathartic. The four I saved were all happy pictures: a group photo from the Postulant year, receiving the veil (that’s the white-veiled me ), taking vows (that’s the black-veiled me with the lei), and a posed picture with me looking holy and ethereal. *snerk*

As much as anything from The Sound of Music gives me hives, you know how in that movie Maria was always in trouble? That was my life in the convent. I got in trouble for whistling once! And we all played the guitar and sang at Folk Masses back then. Oh, and we perpetrated that crime against Cyd Charisse—the crime known as Liturgical Dance. Ah, the early 1980s.

My nuns wielded rulers and the almighty power of control over recess. What does your protagonist carry as a weapon? 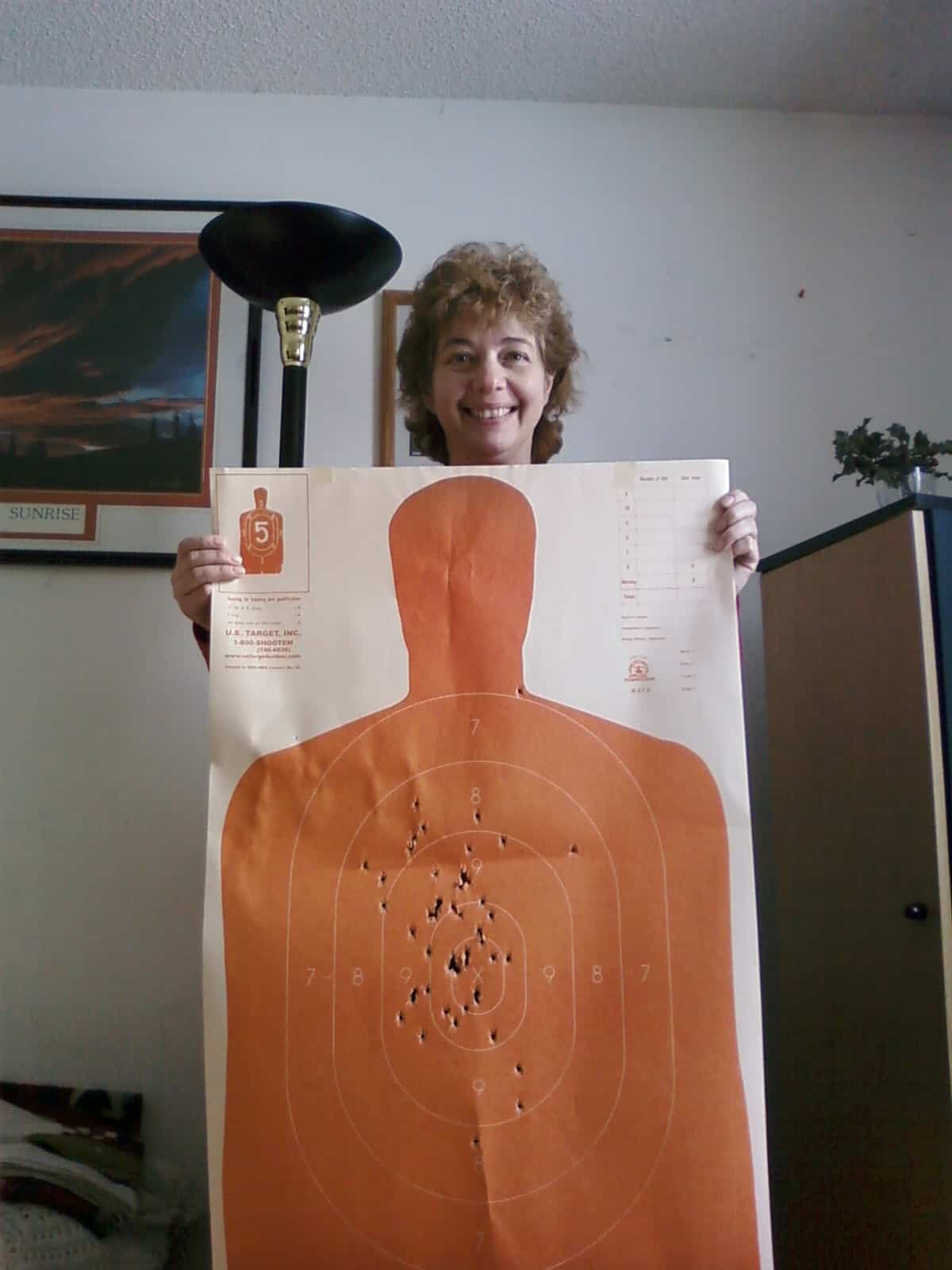 Ex-nun with a gun!

When she was a nun she wielded a ruler too. So far in the series, she doesn’t carry a weapon. She’s athletic and knows self-defense, so she can fight off the bad guys when necessary. In later books, she’s going to learn how to shoot a Glock. To do this, her creator had to learn that skill. I am happy to report that I’m not a bad shot. The photo is me with my target from the lesson. With my first shot, I hit the target in the neck. Not bad for someone who’d only dabbled in archery before.  Alas for Giulia—so far she’s been a dyed-in-the-wool pacifist. But she wants to keep catching bad guys, so she’ll do what she has to do. There will be embarrassing (for her) humor involved.

Your protagonist sounds intriguing and very different. How long did it take you to find an agent, and what types of reactions did you get along the way?

I have this folder on my hard drive labeled “Passes.” It represents four solid years of work, three complete novels, and several layers of rhino hide.

The novels are three different genres: Religious horror, paranormal, and mystery. The mystery—that would be Force of Habit—has an interesting story behind it. I queried a well-known agent with the religious horror, mentioning in my query that I was an ex-nun and thus knew religion. He passed, but suggested that he’d like to see a mystery starring an ex-nun who solves crimes. I dismissed that suggestion initially, because “I wrote horror.”

However, the idea percolated in my head, and wouldn’t leave me alone. Eight months later I had Force of Habit. I queried the same agent with it. He asked for the first three chapters—and passed. In the politest way possible, too. Ya gotta laugh.

So I jumped onto the query-go-round, which immediately turned into a roller-coaster. I got requests for partials and fulls. I also got form rejections on requested fulls (ouch!). I got two offers to revise and resubmit on two different books. I had one agent love my characters and another say they were like watching beige paint dry. It truly is a subjective business.
Then in spring of 2009, I sent a “Why not?” query to Kent D. Wolf, an agent whose list of sales and genres he was seeking looked interesting. The next day, he called to request the full of the mystery. (Agents don’t normally call for that. I was a bit startled.) Two days later, he called to discuss the book, the characters, the convent, and how I felt about revising. (Is the sky blue? Of course I was willing to revise!) Two days after that, he called to offer representation.

That’s the long answer. The short answer is: It took me six days to find an agent. Okay, four years, 185 rejections, and six days.

So, last question — we debut at the same time.  I haven’t had my ‘real’ moment yet — the moment it all seems like this is really happening, the book will be published, and I’m not just making it up.  Have you?  If so, what is it?

I had my “real”  moment today—and it was a delayed reaction.

Some writers I know say their “real” moment was when they got their signed contract, or their advance check, or their page proofs, or their box of books. All of those moments were “oh, wow!” moments for me.

Amazon has started to ship my books already. The head of the company brought his copy in and I autographed it, then I went back to work. About three hours later, it hit me: I autographed my book for someone who bought it. Online. For real. It’s happened. I just sat there at my desk, and I got this huge grin on my face. Now I know it’s real.

Last Christmas, my agent told me that my book sold the day before I started a 4-city tour with Denver and the Mile High Orchestra, my favorite band. (I was part of a big Christmas choir backing them up). I’d been writing a series of articles on the rehearsal process for BuddyHollywood.com, and the rest of the choir knew about by dreams of getting a book on the shelves of brick-and-mortar bookstores. When I announced my three-book deal, a fellow singer said, “All your dreams are coming true.” Today I can say: They are.

Thank you Alice!  I’m glad to have you as my debut sister!

Leave a comment before Tuesday to be entered to win a copy of Force of Habit. (The Random Number Generator will choose, but perhaps karma will be swayed in your favor if you can include your own catholic school experiences.)